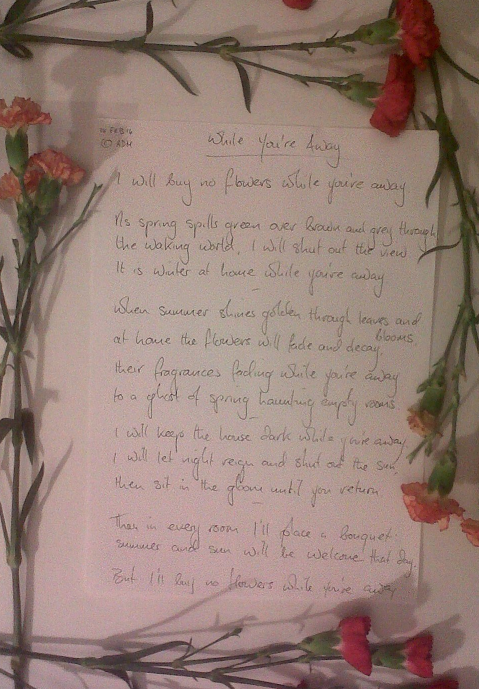 I like flowers.  It’s not the sort of thing men normally admit to, but it’s true.  Years ago, I confessed the fact to a girl I rather liked.  I was sitting beside her at the time.
She smiled. “That’s nice” she said.  “It shows you’re in touch with your feminine side.”
“I’d rather be in touch with your feminine side”, I said.
Her smile vanished. “Why do you have to spoil it by being so... male?” she said disdainfully, and left.  I was young.  I had a lot to learn about talking to women.


Another time, in another place, with another girl, I was standing beneath a cherry tree on a blustery spring day.  Pink petals swirled around our feet. Cherry blossoms, whisked from the branches, caught in our hair*.
She smiled.  “Isn’t it lovely?”
I was doing a botany course at the time and was anxious to show off my knowledge.
“You do realize” I said, with a superior air, “that flowers are basically sex organs.”
Her smile vanished. “Why do you have to spoil it by being so... biological?” she said disdainfully, and left.  I was a bit older, but I still had a lot to learn about talking to women.

I eventually learned enough about talking to women to persuade Neelam to marry me. After we got married I made it a regular habit to buy flowers, and I do so most weeks.  But every time she goes to India I stop buying them.  Somehow, they seem too gaudy when she’s not around.  It’s a bit like the shirt you buy when on holiday in a sunny country.  Back in Britain, without the sunshine, it no longer seems bright, it just seems loud.


Neelam flew out to India on Sunday to produce the next Look-in-the-Bag collection.  I won’t be buying flowers for the next few weeks.