It's always intriguing when something that began as a contingency becomes a driving force.

In the case of Look-in-the-Bag, that happened because we couldn't afford models.  We would have liked to use photographs of LitB customers, but when we were developing the website we didn't have any, so that wasn't an option.

Fortunately that's changed in the last year, and some of our customers have allowed us to feature them on our Facebook page.

However, when setting up the website, we wanted to show our products being worn, so Neelam decided to draw some models and to dress them in Look-in-the-Bag accessories.  The result was a quirky and colourful collection section that makes our website a bit different from most other fashion sites.

People liked the collection section and began to express views on their favourite models.  So that we knew which ones were being referred to, we gave them names.  With names came characters and back stories.

Our models have now begun to take on lives of their own and have just come back from travels*.  Being fictional models though, they were able to go to some rather unusual places.

*Their travel stories will pop up once a week between now and Christmas.
Posted by Look-in-the-Bag at 11:31 1 comment: 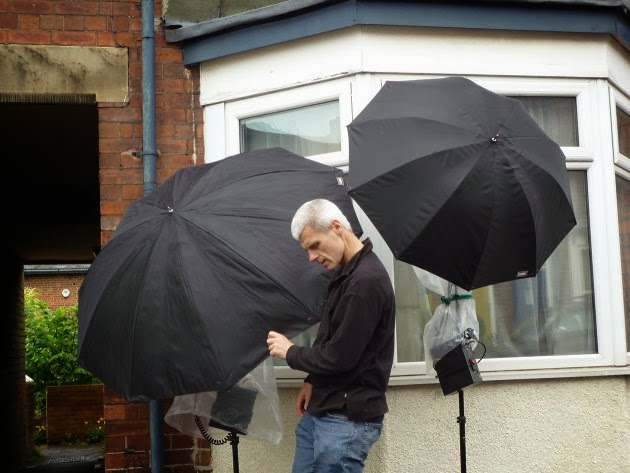 
Murdo began by setting up a bank of reflectors outside the front window of our house. Associated with each was a powerful flash unit that helped to make up for the lack of daylight, and caused our neighbours to wonder whether a lightening storm was on its way. 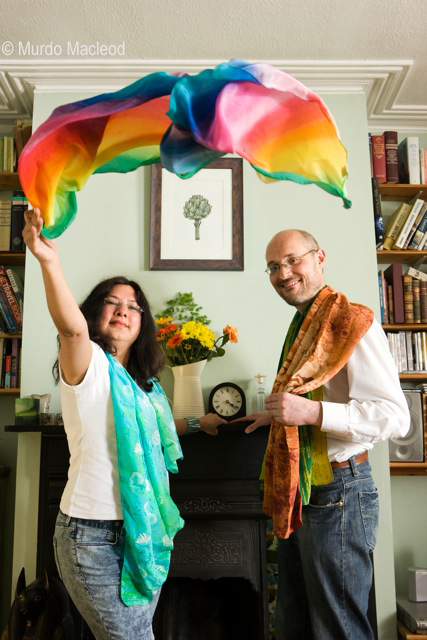 Murdo, it turns out, likes to introduce a sense of frozen action into his images.  If he can’t do that, he goes for a touch of the surreal. Ideally, he does both.  Fortunately for Neelam, Murdo didn’t ask her to pose with bird skulls or hollowed-out fish.  Instead, he asked her to throw scarves at the camera.  Initially she threw them straight up into the air and Murdo clicked away as they drifted to the ground.  He tried that several times, then switched to another approach.  He taped a 5p piece to the corner of the scarf and asked Neelam to throw that end towards him.  She did so, enthusiastically.


After a couple of hours of Neelam throwing scarves and me smiling fixedly at the camera, Murdo decided to take some photos in our garden - just in case the magazine editors wanted something more conservative.  Sadly, despite Neelam’s aching arms, that was the shot they went for.

All in all though, it was a memorable day.  It took several hours for my cheeks to feel normal again.  Neelam's arm muscles suffered even more, but if the Indian Women's Cricket team ever needs additional bowling talent, she may be worth considering.

I finished my teaching contract with University of Sheffield on 30 June this year.  The last working day was Friday 28th June, which I took as leave.


The last day of any contract tends to be gloomy.  Concerns about the future are highlighted, and regrets about past choices surface afresh.  On this last day, the weather got into the spirit of things.  The sun failed to break through low-lying clouds and gloom prevailed.  Neelam and I however, were not feeling gloomy.  Thanks to PRIME’s publicity machine, we were expecting a visitor who came equipped with sunlight (well - an electrical substitute). 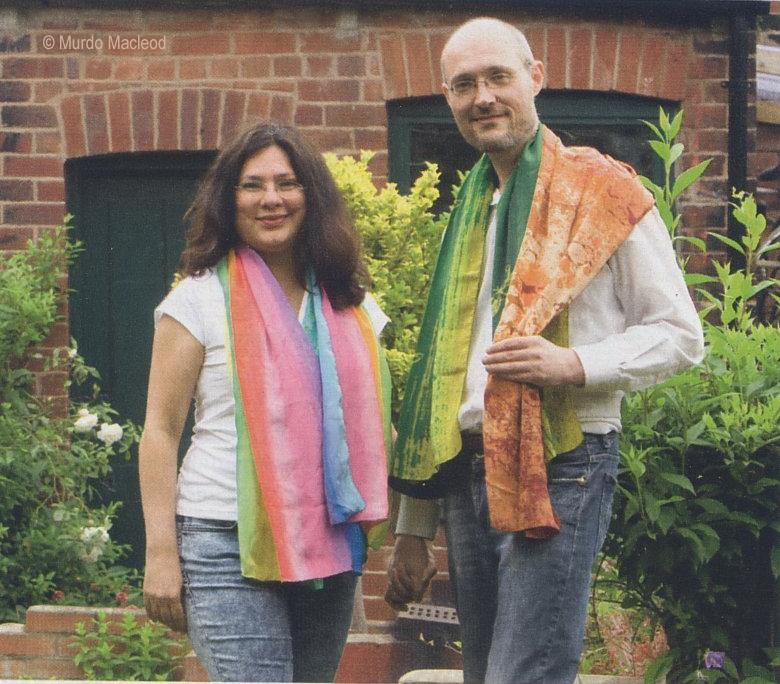 Not long beforehand, we had had a phone call from Saga Magazine.  They were running an article on PRIME and wanted to include some case studies.  Look-in-the-Bag was selected (along with LinchpinPA).  Saga phoned to ask if it was alright to send round a photographer. I thought about the somewhat chaotic state of our house and the even more chaotic state of our garden and suggested meeting the photographer in a local beauty spot*.  Sadly the suggestion was declined.  We were informed that the photographer, one Murdo Macleod, preferred to shoot subjects in their natural habitat, and would arrive at 10am.


I googled Sheffield-based photographers by the name of Murdo Macleod but didn’t find any.  The only photographer I found by that name was an Edinburgh-based, award winning press photographer.  To our amazement, it turned out to be him.

*Yes - Sheffield does have beauty spots!
Posted by Look-in-the-Bag at 04:47 No comments: