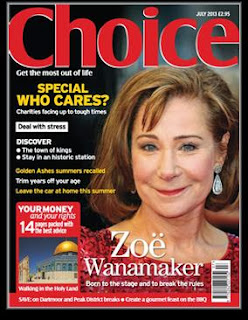 Look-in-the-Bag's 2013 brief sparkle* in the media began in January.  Neelam picked up the phone one day and was taken aback when the well-spoken woman at the other end announced that she was phoning from the office of Prince Charles.

The caller explained that PRIME wanted to use LitB as a case study.  Were we happy to for them to send our details to the press?

We managed to overcome our concerns about media intrusion, the paparazzi, and phone-hacking and agreed.  Shortly afterwards, we received a phone call from Marcus Duffield.  He wanted to interview me on behalf of Choice Magazine.

They run a regular feature (called New Directions) about people who have a radical change in life.  Marcus sent me an example from a previous issue.  It nearly put me off doing the interview.

The example dealt with the experiences of an RAF engineer who traded a life amongst Harriers and Phantoms for one amongst the skiing fraternity of the French Alps.  My experiences seemed decidedly mundane compared to such a (literal) high flyer.

Still, Marcus was encouraging.  We chatted over the phone for half an hour or so and he managed to turn my ramblings into a coherent article.  I never got to see who featured in Choice Magazine's next "New Directions" article, but I can't help feeling that I was an easier act to follow than my predecessor.


*We're aspiring to a media blitz but we all have to begin somewhere.
Posted by Look-in-the-Bag at 02:03 No comments:

The cost of publicity 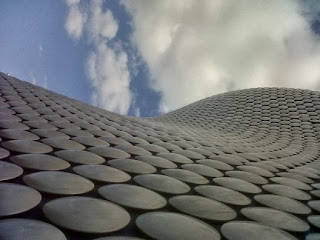 Look-in-the-Bag learned something about the cost of publicity when we placed a small ad in Good Housekeeping Magazine last December.  Our website was new and shiny and we wanted to attract customers for Christmas so we paid out £300 for an advert in the classified section.  It led to a small jump in visits to the LitB site (around 60) but no sales.

One problem with trying to sell things through advertising is that people know that adverts are biased.  Of course, biased information is not necessarily untrue information, but it’s not surprising if people question what an advert says about the product being advertised.  The same isn't necessarily true of a product mentioned by a brand ambassador or used in a film or a TV show.  For example in the Bond film Skyfall, when Bond downed a beer in place of his usual vodka martini, the audience were more likely to think “After what he’s been through he deserves a beer” than to think “How much did Heineken pay for that plug?”

The kind of person cynical enough to ask such a question would probably be cynical enough not to be surprised by the rumour that Heineken payed around $45 million to reach the plots other beers couldn’t reach.

Clearly, the most valuable sort of publicity is good publicity that isn’t paid for.  Thanks to PRIME, Look-in-the-Bag has been brought to the attention of a couple of magazines (Choice and Saga) and the local press.  We even had the undivided attention of a top press photographer, which is something I’ll blog about in a few days time.

A useful piece of small luck 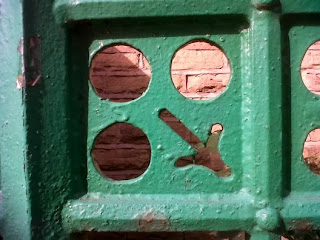 I've blogged about various organisations that have helped Look-in-the-Bag in our 18 months of existence. There was the late, lamented Business Link, the bacon-scented Sheffield Enterprise Agency, and (by royal request) PRIME.  Somewhat unexpectedly, we also managed to get help from University of Sheffield Enterprise (USE).

Around four years ago I completed a post-graduate diploma.  I began the course thinking that it would be interesting and would improve my career prospects.  I ended it feeling frustrated by the lack of structure and guidance, and with worse career prospects than when I began.  All in all, it seemed to have been a complete waste of time.

I was so disillusioned by the time I finished that I forgot to make arrangements to pick up the certificate.  Eventually I received it in the post and filed it away under "Useless Qualifications" (I have quite a collection!)

Around that time Neelam and I were in the early stages of setting up Look-in-the-Bag.  Someone at the university suggested I should check out USE. I did, and found that they supported students up to five years after graduation.  I graduated from Sheffield as a mature student in 2000, so assumed that I was well past their 'help-by-date'.  As an after-thought though, I mentioned my diploma, dated November 2011.  To my delight, I learned that, yes, it counted.  As a result, Look-in-the-Bag was entitled to use USE as its registered office, as well as gaining access to marketing and legal advice.  My certificate got refiled - away from "Useless Qualification" and into "Unexpected Business Opportunities".
Posted by Look-in-the-Bag at 14:33 No comments: