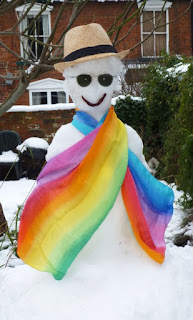 She loves Indian design, but at this stage she wants to concentrate on less geographically specific 'Look's.   One of the problems is expectations. Because Neelam is Indian by birth, people who meet her enthuse about the colours, the patterns, the textures and the fabrics of Indian products and assume that she will produce similar designs.  Neelam shares their enthusiasm, but when people in Britain talk about Indian design, they often do so in the same way that they talk about Indian food.  Ethnically, culturally and linguistically, India is probably less homogeneous than the European Union.

Neelam likes the 'traditional' Indian looks that are admired by people here.  She also likes modern reworkings of them (such as those sold by Yuti, her niece), and she likes styles that are less well-known in the West - such as Madhubani and Warli.  Above all though, she appreciates classics.

Designs evolve as a result of a combination of culture, environment, technology and tradition.    Most parts of the world for example, have traditional clothing based on long strips of cloth that are wrapped around the whole body (kilts, kimonos, saris, sarongs, togas, etc).  The type of cloth (cotton, linen, silk, wool) depends on the environment, as does the availability of dyes (e.g., woad, saffron, carmine). 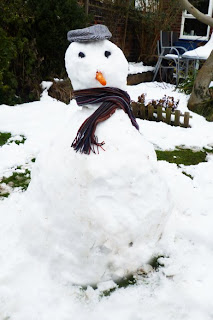 Technology affects tradition.  When cultures discovered stitching, it became possible to have clothing cut and shaped (tailor-made) to cover specific parts of the body, and it increased possibilities for adornment.
Recently, Neelam had the opportunity to recreate a classic design that was not available to her in her youth.  She grew up in South India, where the environment is not conducive to the construction of snow figures.  Last week's snowfall in Sheffield meant that she could make up for lost opportunities in her youth.  Her first effort provided a useful mannequin for Look-in-the-Bag,  but in the end, she decided she preferred the classic snowman look.

Keeping a husband out of mischief


Around this time last year,  Neelam and I were sitting in the Gardener's Rest pub in Neepsend, talking to a second hand book shop owner called David.  He's the brother in law of a friend (Michael) whose birthday we were celebrating. 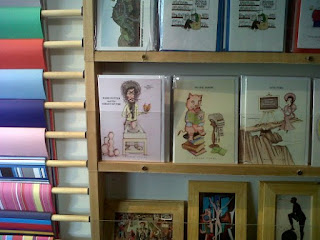 David was in the process of moving his shop (Books on the Park) to larger premises, and one of the things he hoped to do with the extra space was sell cards from local artists and designers.  Michael had already mentioned this to Neelam as an opportunity, and she had explored options.  However, a day or so after meeting David, Neelam came up with a bright idea.

The best ideas work on several levels.  Not only do they do "what it says on the tin", they also suggest ways of using the tin when it's empty.  One of Neelam's many problems is that she has a husband with a low boredom threshold.  Rather than leaving her alone to get on with her design work, he comes along and fiddles with her pencils.  Her bright idea would (she thought) not only lead to suggestions for greetings cards, it would also provide respite for her pencils.

Neelam suggested that I should try coming up with ideas for cards based on book titles.  I immediately suggested that she sketch an inebriated bird jeering at the world from a floor littered with empty bottles of Mexican liquor.  Neelam chose not to illustrate Tequila Mockingbird, but liked the suggestion.  She liked even more the fact that I sat down at my computer and began to generate further ideas.  Sadly for her, in less than an hour I had knocked off over a dozen suggestions and went downstairs to resume pencil fiddling.

Within a month, Neelam had produced ten greetings card designs, all on the theme: "A Twisted Title: It's almost a classic".  It's a bit of a change from scarves, but she enjoyed doing them.  They're now on sale across Sheffield (in Books on the Park, Sheffield University Blackwells, and Sue Callaghan Bookbinder), as well as at Octavia's Bookshop in Cirencester.  Needless to say, they're also available from the Look-in-the-Bag Website.

One Saturday in July 2012, I sat and watched Neelam work on a logo for Look-in-the-Bag.
There was a time when I would have thought it was a bit premature to have a logo before one had a product.  Now I'm not so sure.

I used to be scathing about marketing; nowadays though, I'm a bit more open-minded about its value. Having a wife with a background in advertising has certainly played a part in my change of heart, but it was beginning to change before I met her.

My brilliant, beautiful and creative wife (who carefully reads all my blog entries before they're published) enjoys designing logos - which is just as well because she's had to do it a lot over the years.  She began working on a logo in a quiet moment not long after we came up with the idea of  Look-in-the-Bag.  Her initial thoughts led to:﻿
﻿
﻿﻿﻿﻿

It was clear and neat, but somewhat formal and reminiscent of a chainstore label.  So she played around a bit more and came up with:
﻿
﻿
﻿

Neelam was quite pleased with this logo and was slightly disappointed by my lack of enthusiasm.  It appealed to her because of its quirkiness, and it did begin to grow on me.  However, after we had discussed it a bit further, Neelam decided she wanted to try coming up with a design which could link the company name and theme. I liked this idea and sat beside her as she played around with fonts, colours and shapes.

It was fascinating watching her. I know nothing about design, but I know a little about poetry.  It seems that, just as with poems, "less is more" when it comes to logos.

It all begins to fit together 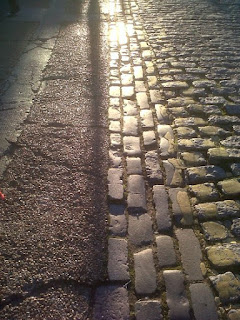 Neelam had been keen to do something on the theme of mosaics since she moved in with me. Her first planned project was to replace our boring cement doorstep with one coated in small tiles.  I was less enthusiastic about the scheme than she would have liked.  Her passion for mosaics found a new outlet when we started planning Look-in-the-Bag.

However, much as Neelam liked the idea of a line of accessories based on mosaics, somehow it didn't seem to offer enough scope for originality. I probably didn't help matters when I pointed to a checked scarf she was wearing and asked "What's the difference between that and a mosaic scarf?"

I have a talent for looking but not seeing. I suspect it's widespread (particularly amongst men). I can lose my keys and find them half a day later in the pocket I thought I had emptied. In the case of 'Look in the Bag' however, both Neelam and I were guilty of looking but not seeing. The name was a play on the word 'Look' - treating it as both a noun and a verb. We had been undervaluing the noun. As a result, on a Sunday morning, late in November 2011, Neelam sat up in bed and began frantically writing down ideas in her bedside notebook. Within a few minutes she had a long list of themes on which to base designs. The Tessellated Look will include mosaic-styled scarves and jewellery; but Neelam's list was the start of a long (and still growing) list of 'Looks'. To paraphrase her words, the ideas should combine quality and a touch of humour into a designer look.
"We should aim to own the word 'Look'", she said.
"What does that mean?" I asked.
"It's corporate language. When people use the word 'Look', I want them to think of us."
"You spent far too long in advertising."
She laughed.
"Why not be really ambitious?" I suggested. "We could aim to own the word 'In'. Or 'The'.  They're far more common than 'Look'."
She gave me a look that I would not wish to try marketing.
Posted by Look-in-the-Bag at 11:35 No comments: 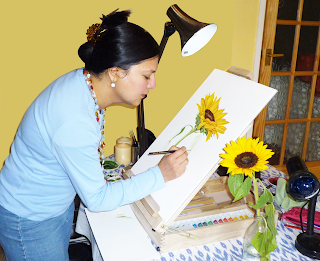 One of the ways in which Neelam exercised her talents when she first came to the UK was through botanical illustration.  She proved to be very good at it, and is beginning to acquire something of a reputation locally.  It was not surprising therefore, that her first thoughts on design should have focused on plants and flowers.  Sadly, no-one with whom she discussed her floral ideas was terribly enthusiastic.

Market research is a tricky thing - especially where creativity is involved.  You never have to look far before you find someone who confidently asserts that your ideas are lacking in some way.  People love to give an opinion, and the more ignorant they are, the more strongly they express it.

In 1999, the psychologists Justin Kruger and David Dunning wrote an article entitled  "Unskilled and unaware of it: How difficulties in recognizing one's own incompetence lead to inflated self-assessments". They describe the phenomenon (named, imaginatively, the Dunning-Kruger effect) whereby ignorant people can be so ignorant that they are ignorant of their ignorance, and talk with greater confidence than experts.

When it comes to fashion, I'm a DunKrug.  I am to fashion what Jimmy Choo is to army boots.  The only time in my life that I ever came close to being fashionable was when I got beaten up as I was leaving school.  It was the punk era and I walked home in a ripped blazer and torn trousers.   If I'd had a few safety pins handy, I could have become a local trendsetter.

Despite my lack of fashion sense, I was able to suggest, with DunKruggish confidence, that Neelam should rethink her designs.  Unfortunately for her, so did people with far more style sense than I. Neelam's ideas were good (they usually are), but people felt that there was a danger of them veering into territories occupied at various times by Cath Kidston, Laura Ashley and William Morris.

Needless to say, we haven't seen the last of Neelam's floral designs.  Flowers featured a little in our first collection, but she's biding her time until she can come up with something distinctively ByNeelam.  Until then, she's turned her thoughts elsewhere.  One of her early thoughts was to design products based on mosaics.  I was quite excited by the idea, and envisioned a nation of accessorizers all dressed like Elmer the Elephant. Sadly, she ended up with something far more subtle and stylish.  Shame.
Posted by Look-in-the-Bag at 03:27 No comments: