Thinking inside the box (or bag) 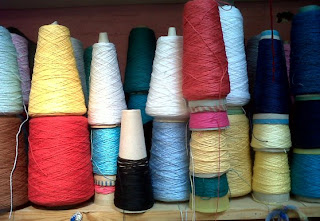 Ideas don't always behave themselves. They arrive at all sorts of inopportune moments - while you're out walking, in the bath, wide awake at 3am. When ideas do that, there's often nothing around to write them down on (or with).  Sometimes, people go to drastic lengths: according to Anne Fadiman in her book 'Ex Libris', Sir Walter Scott once had a great idea for a line while out hunting. Rather than risk forgetting it, he shot a crow and wrote down his thoughts using a crow quill dipped in blood.

Fortunately, when Neelam (my wife) and I came up with the idea for our company, it was in a rather more convenient setting. It was September 12 2011 and we were in a Business Link workshop called "Getting the Basics Right". Neelam was thinking about setting up a company to design scarves and other accessories and  I was there to support her.

During a coffee break, Neelam got chatting to a jewellery designer, When we met up again, she told me she had been thinking about asking the jeweller to produce items that matched her scarves. I thought it would be fun to combine the matching accessories in a well-designed container and sell them under the label "Look in a Box".

Neelam liked the idea, but we both felt that it would be impractical. Neelam has high standards (frustrating for me when it comes to DIY and cooking, but important when it comes to design and manufacturing). Any box would have to be of excellent quality. They would therefore look good, but be of limited use. Some customers may want to re-use them but the chances are they would mostly become stylish bin-fillers. Also, as far as I was concerned, unless we were buying them flat-pack (a word that causes me to think of Ikea and have nightmares) we would be paying for the transport of a lot of air. 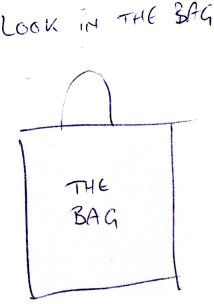 Shipping flat-pack boxes may be a headache, but shipping flat-pack bags wouldn't be. So my light-bulb moment that afternoon was to suggest that, rather than selling a look in a box, we went for a look in a bag. I remembered the fun I had as a child delving through the gift bags I was given when leaving friends' parties. It was always a thrill to look in the bag and see what was there.

I showed a scribble to Neelam (see right) and explained the idea. She's an aficionado of wordplay, so the idea of looking in a bag to find the basis for a stylish look appealed to her. Also, she's Gujurati by descent and I'm Yorkshire by descent, so we both come from communities renowned in our respective countries for thriftiness. The thought that the packaging could act as an accessory that complemented its contents appealed to both of us.

The bag is now open and the world is invited to look in it.

Look-in-the-Bag is a new online fashion accessories shop that sells 'Looks'. Each one comprises a scarf and a matching piece of jewellery sold in a bag designed to complement the 'Look'. Check out our new collection, ranging from the classic to quirky, at our website. .

This blog will give an account of how Look-in-the-Bag came to be, and of some of the lessons we've learned (and are learning) en route to becoming a world fashion phenomenon (or at the very least, solvent). You can find out a bit more of what we're doing day to day from our Facebook page (LookintheBag) and from Twitter (also, surprisingly enough, LookintheBag).